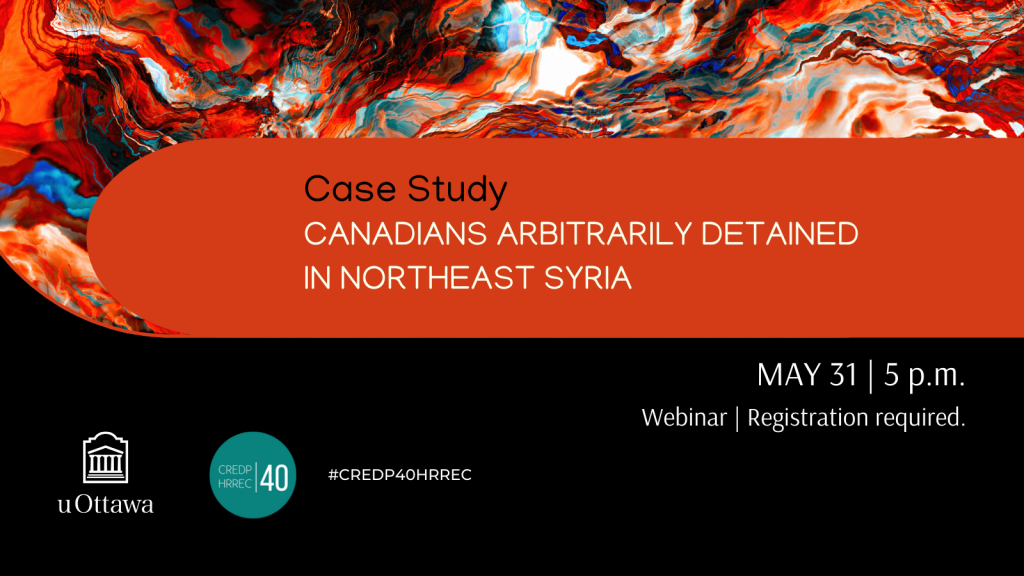 The Human Rights Research and Education Centre (HRREC) and the Canadian Red Cross are pleased to invite you to this virtual event:

The session will be structured as a case study of four dozen Canadians unlawfully detained in locked-desert camps and prisons for Islamic State (ISIS) suspects and their families in northeast Syria. The Canadians have been held by the Kurdish-led authorities since the fall of ISIS in March 2019 in life-threatening, deeply degrading, and often inhumane conditions. They have never been charged with a crime or brought before a judge to review the legality and necessity of their detention. The innocent, such as the children who never chose to be born or live under ISIS, have no hope of leaving without their government’s intervention. Meanwhile, any detainees potentially implicated in ISIS crimes may never face justice. We will examine the plight of these Canadians, the government’s justification for its inaction, and Canada’s international legal obligation to intervene when citizens abroad face serious abuses.

ONLINE | ZOOM Webinar
Event in English. | Free and open to all.

Farida Deif is the Canada Director at Human Rights Watch. Based in Toronto, she monitors human rights abuses in Canada and advocates for a rights-respecting Canadian foreign policy. Prior to joining Human Rights Watch, Deif worked at the United Nations with UNICEF, the Office of the High Commissioner for Human Rights, and UN Women. From 2003-2008, she was a researcher covering women’s rights in the Middle East and North Africa, where she investigated and reported on a range of issues from the arbitrary detention of women and girls to gender-related killings. She participated in Human Rights Watch’s first fact-finding missions to Libya and Saudi Arabia and has published extensively on human rights abuses across the region. She holds graduate degrees from Columbia University’s School of International and Public Affairs and l’Institut d’Etudes Politiques de Paris and obtained an undergraduate degree in political science from Carleton University.