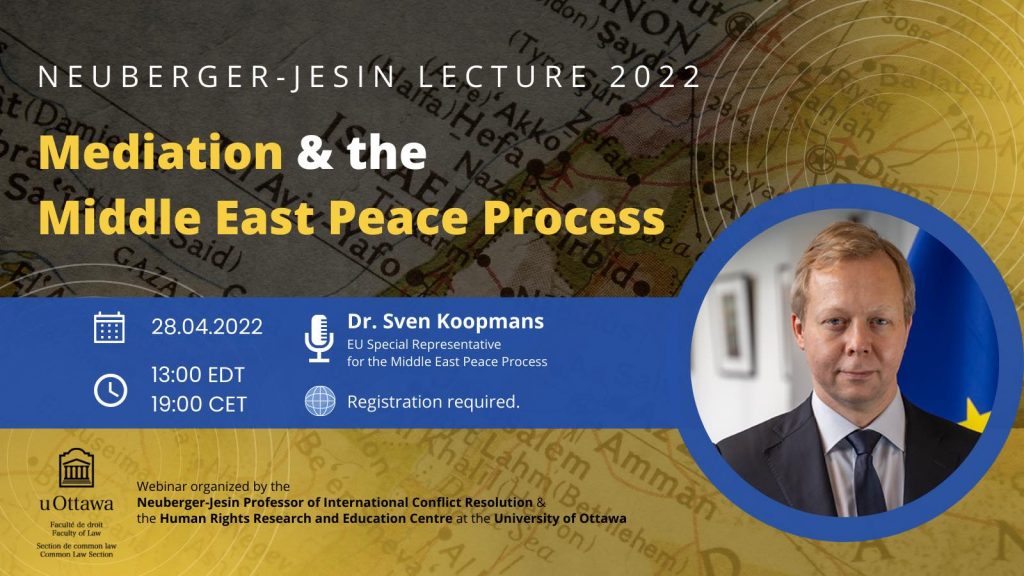 The Human Rights Research and Education Centre (HRREC) is pleased to partner with Neuberger-Jesin Professor John Packer to present the NEUBERGER-JESIN LECTURE 2022:

We are pleased to welcome Dr. Sven Koopmans, European Union Special Representative for the Middle East Peace Process who is charged with providing an active contribution to the final settlement of the Israeli-Palestinian conflict based on a two-state solution, in line with the UNSCR 2334 (2016). He reports directly to the High Representative of the Union for Foreign Affairs and Security Policy, Josep Borrell, on this issue and maintains an overview of all EU regional activities linked to the Middle East Peace Process.

On 29 April 2021, the 27 Member States of the European Union (EU) appointed Mr. Koopmans as the EU Special Representative (EUSR) for the Middle East Peace Process.

Between 2003 and 2016 he was political and legal advisor in peace processes, border conflict mediation and constitutional review processes under the auspices of the European Union, United Nations, African Union and OSCE, among others, including in in Cyprus, Darfur, Mali, Ukraine and Guyana/Venezuela. Between 2014 and 2016 he was senior mediation expert to the UN Special Envoy for Syria, between 2011 and 2013 advisor to the EU Special Representative for Sudan and South Sudan, and from 2008 to 2009 to the International Civilian Representative in Kosovo.

Between 2001 and 2008 Mr. Koopmans was also a barrister (advocaat) at the global law firm of Clifford Chance LLP, specializing in international litigation. In 2000 he advised Bosnia and Herzegovina at the United Nations in New York on negotiations on the International Criminal Court. Mr. Koopmans obtained Master’s degrees in law and political science at Leiden University (1997) and a Master’s degree (1998) and a Doctorate (2007) at Oxford University, the latter for his thesis Diplomatic Dispute Settlement (T.M.C. Asser Press, 2008). He also studied at Sciences Po Paris (1993), Harvard University (1995) and New York University (2000).

His book Negotiating Peace: A Guide to the Practice, Politics and Law of International Mediation was published by Oxford University Press in 2018. Mr. Koopmans has taught peace negotiation at the universities of Leiden and Aix-Marseille III. He was born in Amsterdam on 20 June 1973 and speaks Dutch, English, French and German.