No Borders! No Prisons! No cops! No war! No State? 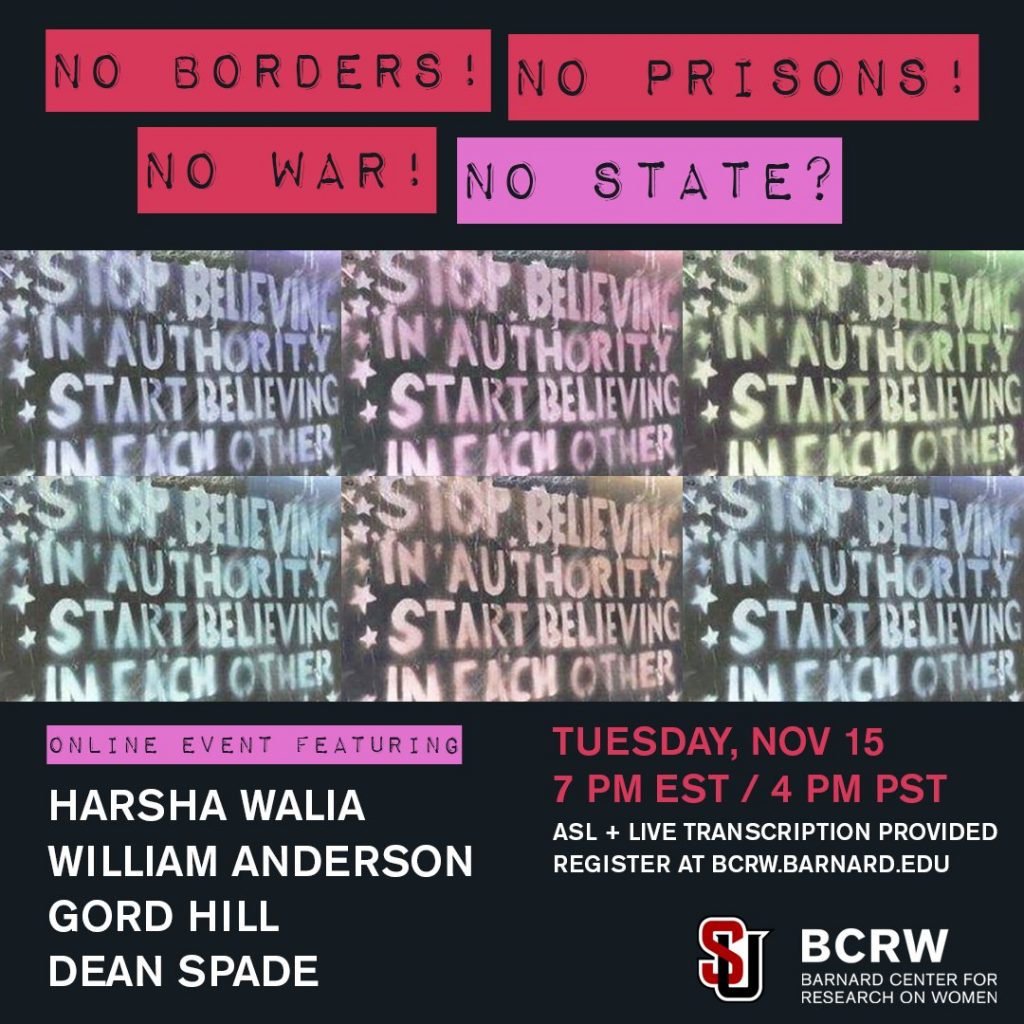 No borders! No prisons! No cops! No war! No state?

Many new people are thinking together about what their lives and communities might look like without the violent apparatuses of their governments caging, deporting, and deploying people. Among abolitionists an important question lurks: are we trying to take over our governments, or get rid of them? When we imagine a world without cops, soldiers and cages, do we still imagine having nation states? Is this question different for people who are living under settler colonial governments, such as those in the US and Canada, versus for others? Some people imagine that the state can become a source of care-taking (distributing healthcare, education, housing), and worry that the state is the only thing that can do such care-taking “to scale.” Others argue that state care-taking programs are racialized and gendered, structured to stabilize extractive systems, and should be replaced with decentralized mutual aid networks. This event gathers three leading thinkers whose work questions the desire to take over the state, to discuss the stakes of this question for abolitionist work right now.

William C. Anderson is a writer and activist from Birmingham, Alabama. His work has appeared in The Guardian, MTV, Truthout, British Journal of Photography, and Pitchfork, among others. He is the author of The Nation on No Map (AK Press 2021) and co-author of  As Black as Resistance (AK Press 2018). He’s also the co-founder of Offshoot Journal and provides creative direction as a producer of the Black Autonomy Podcast. His writings have been included in the anthologies, Who Do You Serve, Who Do You Protect? (Haymarket 2016) and No Selves to Defend (Mariame Kaba 2014).

Gord Hill is the author of The 500 Years of Indigenous Resistance Comic Book, The Anti-Capitalist Resistance Comic Book, and The Antifa Comic Book. He is a member of the Kwakwaka’wakw nation whose territory is located on northern Vancouver Island and adjacent mainland in the province of “British Columbia.” He has been involved in Indigenous people’s and anti-globalization movements since 1990.

Dean Spade has been working in movements to build queer and trans liberation based in racial and economic justice for the past two decades. He is a Professor at Seattle University School of Law and the author of Normal Life: Administrative Violence, Critical Trans Politics, and the Limits of Law, the director of the documentary “Pinkwashing Exposed: Seattle Fights Back!,” and the creator of the mutual aid toolkit at BigDoorBrigade.com. His latest book is Mutual Aid: Building Solidarity During This Crisis (and the Next).

Harsha Walia is a Panjabi writer and organizer based in Vancouver, Coast Salish territories and rooted in migrant justice, anti racist, feminist, abolitionist, anti-imperialist, and anticapitalist movements and communities for over two decades. She is also the author of Border and Rule: Global Migration, Capitalism, and the Rise of Racist Nationalism (2021) and Undoing Border Imperialism (2013), and co-author of “Never Home: Legislating Discrimination in Canadian Immigration”, as well as “Red Women Rising: Indigenous Women Survivors in Vancouver’s Downtown Eastside.”

Live transcription and ASL interpretation will be provided. Please email any additional access needs to skreitzb@barnard.edu.

This event is free and open to all. RSVP is preferred.

The event will stream on BCRW’s YouTube Channel. RSVP to receive a link to the livestream. Links will be sent close to the date of the event.