Virtual Launch of Future on Fire: Capitalism and the Politics of Climate Change by David Camfield 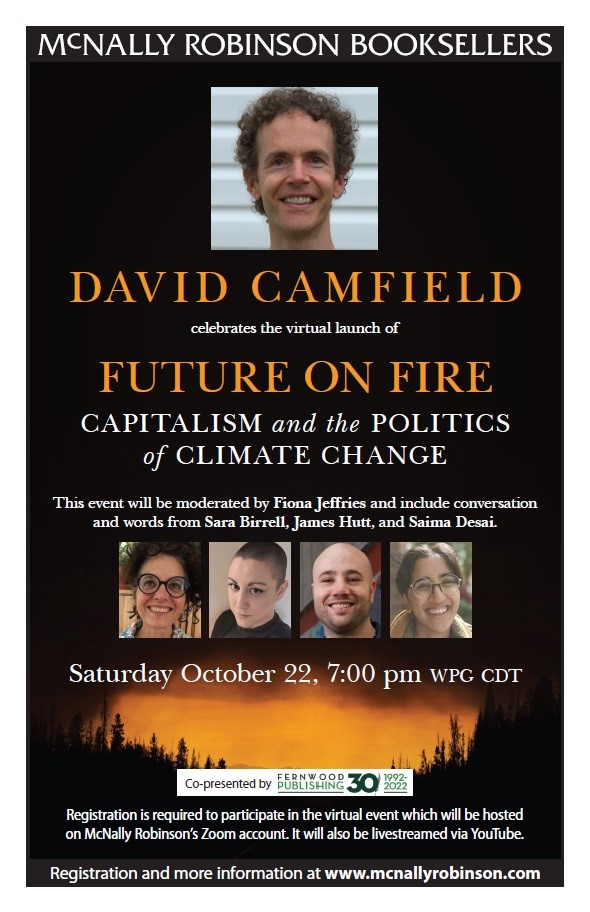 Join us for the virtual Canadian launch of Future on Fire: Capitalism and the Politics of Climate Change by David Camfield. This event will be moderated by Fiona Jeffries and include conversation and words from Sara Birrell, James Hutt, and Saima Desai. This event is co-hosted by McNally Robinson Booksellers and Fernwood Publishing.

Registration is required to directly participate in the Zoom webinar. It will be simultaneously streamed on YouTube. 7pm CDT (WPG) // 6pm CST (SK)

Future on Fire argues that a just transition from fossil fuels and other drivers of climate change will not be delivered by business people or politicians that support the status quo. Nor will electing green left leaders be enough to overcome the opposition of capitalists and state bureaucrats. Only the power of disruptive mass social movements has the potential to force governments to make the changes we need, so supporters of climate justice should commit to building them. Confronting the question — what if heating above 2 degrees becomes unavoidable — and refusing to despair, David Camfield argues that even a ravaged planet is worth fighting for and that ultimately the only solution to the ecological crisis created by capitalism is a transition to ecosocialism.

Host Fiona Jeffries is an editor at Fernwood Publishing.

Sara Birrell (they/she) is a socialist, abolitionist, and writer from Treaty 4. Their work has appeared in Briarpatch Magazine, the Sask Dispatch, and Media Co-op, among others. They are the host of the Unmaking Saskatchewan podcast.

James Hutt is an organizer and writer on unceded Algonquin Anishinaabe territory (Ottawa). He has led campaigns and organizing for unions and advocacy groups across Canada. James is also the Climate Justice Columnist for Our Times Magazine.

Saima Desai is the editor of Briarpatch Magazine, an award-winning national magazine of grassroots politics and action. She’s also the co-founder of the Sask Dispatch, a progressive, independent publication in Saskatchewan.

Author David Camfield teaches labour studies and sociology at the University of Manitoba and has been involved in social justice efforts since high school. He is the author of We Can Do Better: Ideas for Changing Society and Canadian Labour in Crisis: Reinventing the Workers’ Movement.