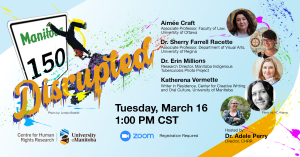 The Centre for Human Rights Research hosted a panel exploring themes of commemoration, reparation, and memory in light of the delayed Manitoba 150 celebrations on March 16, 2021. Below is a summary of the discussion.